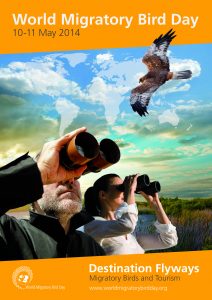 Each week we share a migratory bird you might see, for a few fleeting moments, at your bird feeders, but did you know there is a special weekend to help build awareness of the fascinating bird migration process?

World Migratory Bird Day is this Saturday, May 10, 2014. We’re enjoying watching the migration and thought you might enjoy learning a little bit about this important awareness weekend.

World Migratory Bird Day is a two-day event, running over the second weekend in May each year. The purpose of the event is to highlight how important it is to protect these birds and their habitats. Among the hundreds of participating organizations are The United Nations and The National Audubon Society. Various countries around the world celebrate the weekend with festivals, educational programs and bird viewing excursions.

In 2006 organizers at The United Nations recognized the need to raise awareness about the plight of migrating birds around the world.

The idea first arose in The United States in 1993, when the US Fish and Wildlife Service, Smithsonian Migratory Bird Center and Cornell Laboratory of Ornithology came together for a celebration of migrating birds. Their goal was to encourage bird festivals and outreach in the Americas. The day is still celebrated in North and South America, but it wasn’t until the formation of WMBD that the event was recognized around the world.

The first event was launched in Kenya in 2006 and the program has continued to expand throughout Africa, Europe and Asia. In 2013, 345 events were held in 86 countries.

The 2014 theme for WMBD is Destination Flyways: Migratory Birds and Tourism. Over the upcoming weekend, events will center around the connection between local communities and wildlife tourism. The theme was chosen to introduce the World Tourism Organization’s Destination Flyways project.

Destination Flyways is a program developed to bring sustainable and responsible tourism to the world stage. It targets bird watchers who are traveling the world’s most populated migratory bird paths, which are known as flyways.

Visit the World Migratory Birds Day website to learn more about this important awareness event and find events in your area.