Much controversy has arisen within the community of bird enthusiasts when it comes to the interaction between Bluebirds and Tree Swallows. This is because both are cavity nesting birds, in overlapping territories and are territorial in nature. The variety of Bluebirds living all over The United States, guarantees that almost anywhere a Bluebird box is placed, a fight for usage can occur.

A movement to protect Bluebirds 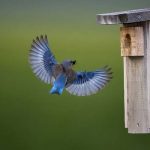 Due to declining Bluebird populations, a movement began in the 1970s to erect individual Bluebird houses and Bluebird Trails around the United States.

It’s easy to see why tiny little blue songbirds are so popular. Bluebirds are beautiful and flashy and altogether irresistible for most backyard bird watchers. For this reason, birders trying to attract them are often upset when other birds use the boxes intended for Bluebirds. The commonly held belief is that tree swallows are primarily responsible for keeping bluebirds away from nesting boxes.

Particularly in the Eastern United States, campaigns to help bluebirds have commonly taught that encouraging tree sparrow populations is so bad that the human destruction of nests is preferable to allowing the birds to finish their nesting cycle. Despite it being against the law to do so.

Both Bluebirds, in different varieties, and Tree Swallows are native to the United States. Both species are worth providing resources for. If you’ve ever seen a swallow do it’s graceful dive, you probably agree. Here’s how to make sure the two species can live in harmony in your area: 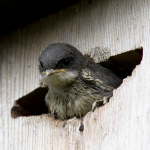 Bluebirds and Tree Swallows are both extremely territorial in defending their nesting boxes. Bluebirds need an area of about 300 feet open and defendable around Bluebird houses. Tree Swallows require a significantly smaller amount of space, around 100 feet.

Except it’s not, with a little planning. Bluebirds will defend against other bluebirds and will fight for a single birdhouse. However, if a swallow house and bluebird house are placed side by side, these two birds will easily cohabitate. All it takes is a second, slightly larger space for the swallows to occupy instead of the birdhouse intended to attract Bluebirds! In fact, as many as three or four swallow nests can be easily maintained in the same area as one Bluebird nest.

In fact, pairing boxes is the only way to ensure swallows won’t take over bluebird boxes. There is no way to completely swallow-proof a birdhouse. By setting up these pairs, with no more than 10 feet between the two boxes, both birds can nest in harmony.