As many as a million people try to attract Purple Martins each year. Many of them will fail for easily avoided reasons. Here are the most common mistakes new “landlords” make with their Purple Martin Houses and how to avoid them. 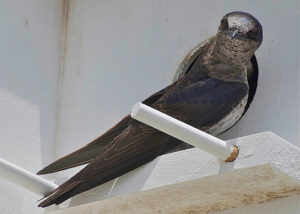 The most common reason Purple Martins pass by a would-be birdhouse is the lack of open space around it. These birds like their space! Leave 40 to 60 feet, on at least three sides, between your mounting location and nearby trees and tall bushes.

In addition to open space around Martin houses, look up and take a look at the aerial space before mounting. The nesting apartment should be free of any aerial clutter. No trees taller than the height of the birdhouse should be any nearer than 60 feet.

2. Other birds take over

If you’re new to attracting Purple Martins, a common problem is another species setting up shop in your new Martin House before the later nesting Martins have a chance to. Territorial birds, like House Sparrows or Tree Swallows, will lay early claim to an empty birdhouse if it hasn’t been used by Martins before. Martins are easily chased away from new nesting sites. Once the site is established they are likely to fight more for it. Developing site tenacity is critical for Purple Martins. They will return to the same site every year, once it is established, but will just move on from a new location.

Unfortunately, when establishing a new site, it is sometimes necessary to take down the box again and again to remove other bird’s nests. To prevent this, fill entrance holes with paper cups and put up birdhouses for other species in different parts of your yard. Just be careful to leave a few holes open in apartment-style housing. We know it’s difficult to clean it out over and over, but if you don’t Martins will never recognize that your site is a potential nesting spot. Once the site has seen one successful nesting season, you can leave the holes covered until the Martins return again and begin to perch on the house. This works because Purple Martins are extremely loyal to their previous nesting sites and will only move to a new one when something goes wrong.

When establishing a new Purple Martin nesting site, you’re trying to attract last year’s fledglings to your Martin House. Most older birds are already well established somewhere else and will not stop at your site. The younger birds will come five or six weeks after the older birds. Wait to open up your birdhouse until a few weeks after you see the first Purple Martins in your area and you’re more likely to attract a younger bird without another species taking over the house.

Make sure the plans or the pre-made house you choose is made to reputable specifications. Many plans you can find on the internet are not really correct, or just not specific as possible. Look for these specifications on any Martin house you build or buy:

Avoid these three common mistakes and you’ll have a much easier time attracting Purple Martins. The first nesting cycle is the most difficult. Be patient and persistent. Once you’ve seen one season of nesting with your Purple Martin House, you’ll see them back for years to come.